The giant apes the mountain gorilla
Gorillas are some of the most dangerous animals ever if you ever see them in the heart of Africa and in their natural habitat at the vicinity of the mountains. These powerful gorillas live to their names as many of the famous gorillas ever known have always been able to fascinate many tourist who have been able to see the gorillas in their natural habitat and many gorillas have also been on the forefront in pleasing the onlookers in many of the world zoos. Gorillas are the largest of all primates—the group of animals that includes monkeys, lemurs, orangutans, chimpanzees, and humans. Sharing the same natural habitat with the gorillas there are no animals as peaceful as gorillas. In the wilderness the gorillas are always family-oriented and a lot of time is pent in the family of different sizes of gorillas day in day out.

With many of the human features almost resembling to gorillas, people tend to compare gorillas with humans, but there are several differences which make people from gorilla. As

you can see, the gorillas are still in the wilderness still eating their leaves , fruits and nuts and once in a while some flesh or meat from the jungle while you are out there reading about gorillas. Although gorillas  are able to stand straight all the time gorillas will always like to walk using their hands as well as their legs. As powerful and as built as they are, the gorilla arms are much longer than their legs just as the dangerous grizzly bears out there in the wilderness. since gorillas are also good tree climbers while on the ground, gorillas use the backs of their fingers like extra feet when they walk. This is called the knuckle walk.

Troop leader
A group of gorillas living together is called a “troop.” There can be 5 to 30 gorillas in one troop, led by a strong, experienced male known as a "silverback." His job is a big one. He is responsible for the safety and well being of the members of his troop. The silverback makes all the decisions, such as where the troop will travel for food each day, when they will stop to eat or rest, and where they will spend the night. 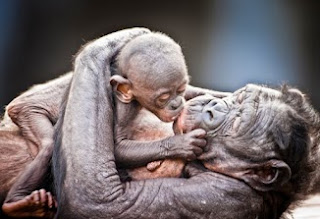 Gorillas are generally peaceful creatures, but sometimes a younger male from another troop will challenge the silverback. To scare unwanted gorillas away, he will beat his chest with cupped hands to make a loud noise, scream, bare his teeth, then charge forward. Sometimes he will break off branches and shake them at the intruder.

Breakfast in bed
Can you imagine waking up each morning surrounded by food? Almost everything a gorilla eats is plant material, so life in the forest is like living in a huge restaurant! Gorilla food includes leaves, stems, fruits, seeds, and roots. And gorillas love to eat—it’s their favorite activity! An adult male will eat up to 40 pounds (18 kilograms) of food each day. Gorillas’ large stomachs can hold the bulky food they eat. Strong jaws help them chew tough stems. At the San Diego Zoo and the , the gorillas get a variety of seasonal fruits and vegetables, plus banana and ficus leaves.

A gorilla troop doesn’t stay in the same place for more than a day. After all, they don’t want to deplete their food source! Each morning the silverback will lead his troop to a new area where food is plentiful. After a morning of munching, each adult gorilla gathers leaves, twigs, and branches to make a day nest for resting while the youngsters play. After their nap, the gorillas will eat again until bedtime, when they make yet another nest, either on the ground or in a tree, for a good night’s sleep. Gorillas never use the same nest twice.

Baby business
A female gorilla is ready to have babies of her own when she is about eight years old. But first, she must leave the safety of her own troop and find another troop or a lone silverback to live with. A newborn grows quickly. At five to six months old it learns to walk, and by 18 months of age it can follow mom on foot for short distances. Still, the safest place for the younster is its mother's back as she travels thru the dense vegetation of their forest home.

Young gorillas learn by imitating what the others in the troop are doing, and by play fighting with other youngsters. Even the stern silverbacks are gentle with the little ones as they practice new skills. A young gorilla stays close to its mom, sharing her nest, until it is four to six years old. Gorillas have been known to nurse for up to three years. 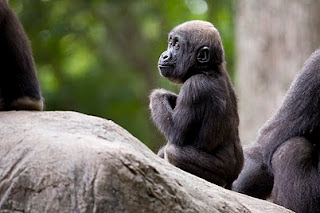 Gorillas have no natural enemies or predators, yet these peaceful creatures are very endangered because of humans. People hunt gorillas for food called bushmeat. Logging companies destroy gorilla habitat. may seem far away, but there is something you can do to help! When you buy wood or furniture, ask if the wood has been certified. This means the wood was taken in a way approved by forestry experts. Buying certified wood will encourage logging companies in to follow wildlife laws that will help protect gorillas and other African animals.

Facts about Gorillas
• A baby gorilla can cling to the long hairs on its mom for a ride, leaving the mother’s hands free for walking.
• Gorillas are very hairy, except for their faces, palms, and soles of their feet.
• The adult males, or silverbacks, are almost twice the size of the adult females.
• No two gorilla noses are alike! Researchers in the wild take close-up photos of each gorilla’s face to help identify individuals.
• The San Diego Zoo's first two gorillas arrived in 1931. They are immortalized as two bronze busts on the Zoo's front plaza.
Posted by Maggie at 04:56