Stars and starfish do they really look alike? There are thousands of sea star species as there are stars in the sky.  Are there any similarities between the stars in the universe and the starfish deep in the oceans and beautiful beaches here on earth? Guess what; there are about 2,000 species of sea stars.  Do all stars have five sides? As far as star fish are concerned, it’s a fact that all sea stars do not have 5 arms.
The beautiful five-armed varieties of sea star are the most well known starfish to mankind and on the other hand the sun star for instance which is also a starfish or sea star has up to 40 arms.
While many people always wish for the star some people would like to see a starfish while having a good time on the beaches early in the morning just to make their day.

Starfish or Sea stars are Echinoderms.

Sea stars as many people call them just because they are found in the sea belong to the Phylum Echinodermata. As a matter of fact the starfish is related to sand dollar, the sea urchins and the sea cucumbers. The amazing facts about echinoderms is that all echinoderms have five-point radial symmetry. That’s why starfish also have five sections as far as their bodies are concerned which radiate from a central disk.

As there are many stars in the universe, there are also a lot of starfish varieties or species as well. While the heavenly stars are huge in size and illuminate the earth with different radiant lights, the sea stars down hear on earth are as beautiful as your eyes can picture the starfish. While the deep oceans have a lot of beautiful animals, you find that there are many dangerous sea creatures which feed on starfish or one another while other animals or sea creatures depend on the sea weeds and plants which grow on the sea bed.

Sea stars protection mechanism
With over 2000 species of starfish in the world, different types of starfish have different body texture. Some starfish species have a skin which resembles leather to the touch and it may feel or slightly prickly. At the same time Sea stars protect themselves with their tough outer covering body on their upper side made up of calcium carbonate with tiny spines on their surface. With many predators lingering around ready to make a meal out of any unsuspecting starfish, the sea star's spines are used for protection from predators. Whether on the beach, deep in the water or just on the coastline starfish attacks are always common with birds, fish and sea otters.

If you’re very keen and walk along the beaches in the early morning hours when the tide is low, you will be amazed to see sea stars or starfish of different sizes which have been washed by the dangerous currents. You will be amazed to know that starfish or sea stars are found almost everywhere there is an ocean. These beautiful star like fish common in intertidal zones. The shy sea stars or well accustomed to the deep sea or oceans are home to the deep waters. Both north and south in the tropical areas and in the world regions, these are also home to the starfish and you fill find that starfish come in different sizes despite their different natural habitat. Starfish of different colors you can ever imagine. With the abundance of starfish or sea star species, these beautiful animals came in different shapes and sizes and what is common about all sea stars or starfish is that they all resemble a star.

Are starfish really dangerous? Can starfish really bite someone? Unless you venture out in the sea star world then can you only experience things like that first hand? While may people have little or no information about starfish, it’s always difficult to know the kinds of starfish found in a particular habitat or beaches around them. There are many amazing facts about star fish. Sea stars or starfish as far as biology is concerned it says that starfish are not fish.

Despite the fact that sea stars live underwater and are commonly called "starfish," they are not fish as many people will have thought. The fact about starfish is that these sea stars have no gills, scales, or fins. At the same time starfish to not have tails and their movement is not as the same like many fish do

Imagine your hands touching a starfish. Most starfish as cool and gentle as they can be are always smooth. The sea stars are generally covered with somehow spines not as sharp as the ones of a hedgehog but dangerous enough to make you scream when you step on one accidentally. Remember these sea creatures can be as elusive as any other creeping and crawling animal in the world. The starfish with a blessing of different colors can blend with their natural surroundings and hide from their enemies or other fish or creatures of prey. While as long as the starfish are in water, their lower side is always soft as they have all their tinny little limbs to walk with and to grab food with while moving around. These tinny starfish legs are as hard working to make sure the mouth is fed for as long as there is movement in the water.

The starfish with many legs but not strong enough to run away from its natural predators, the starfish when in danger would protect itself from its enemies by slowly hiding in any nearby rock in the seabed. The starfish also finds refuge in cracks of the corals along the rocky beaches and lives one day at a time. Not many animals have the capability of losing a limb and yet live to let it grow another day. Just like a lizard which loses its tail when it has been caught and leaves it jumping wriggling here and there, the starfish has the same mechanism of losing one of its limbs or arms. One of the stars or limb of the starfish will break and this helps the starfish to dig dip in the sand or gives it time to hide in the crevices. How soft is a starfish? This is one of the most asked questions about starfish. If a starfish can break its limb, this just goes one way to show how amazing starfish are given their brittle way of life in the deep and shallow treacherous waters we cherish while on the beach.

The main organs of Sea stars are located in their arms. With many wonders of nature some of the starfish can even regenerate an entirely new sea star from just one arm and a portion of the star's central disc and take almost a year for the starfish’s arm to grow back.
As creatures of the sea, survival for the fittest is the game of the day in the sea world . Having to detect and spot your enemy is of great essence as well. Its amazing to note that these beautiful Sea stars have eyes just like the creatures of the deep see. With a very simple eye located at every end of each arm, the starfish eye is not as powerful as it should be. The sea stars can sense light and darkness which could just be enough to make it escape from its prey.

While many of the sea creatures have blood Sea stars do not have blood which proves that they are not fish as people would have thought. When starfish are attacked, they secrete the internal fluid in their water vascular system, in which the sea star pumps sea water through its sieve plate, or madreporite, into its tube feet to extend them just like a jellyfish does with all its tentacles which make it be able to move around even sometimes against the ocean currents. With miniature hundreds of feet, the starfish uses this tube like feet to move around by sucking water and sieving it thereby giving it a thrust while it’s taking the water out. At the same time the sea star's tube feet also help the sea star hold its prey, which includes bivalves like clams and mussels.

Speaking of prey, sea stars have a rather unique way of eating theirs. A sea star's mouth is on its underside. They prey on bivalves like mussels and clams, as well as small fish, snails, and barnacles. If you've ever tried to pry the shell of a clam or mussel open, you know how difficult it is. Sea stars wrap their arms around the animal's shell and pull it open just enough. And then it does something we could never imagine - it pushes its stomach through its mouth and into the bivalve's shell. It then digests the animal and slides its stomach back into its own body. This unique feeding mechanism allows the sea star to eat larger prey than it would otherwise be able to fit into its tiny mouth. 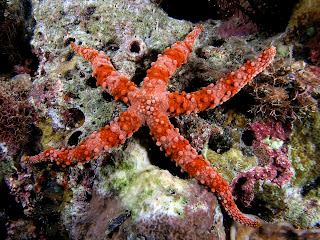 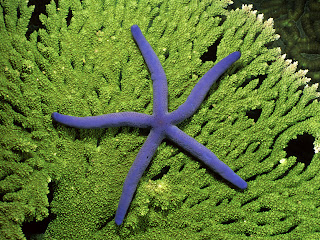 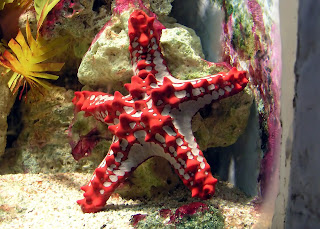 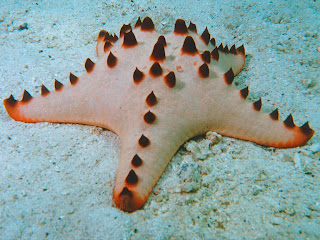 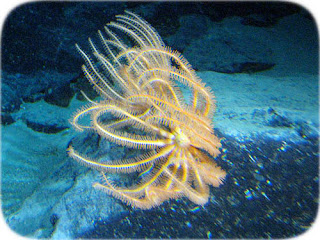 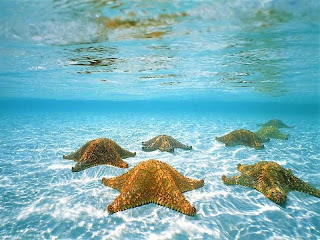 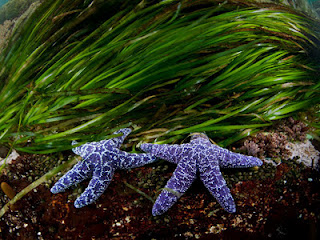 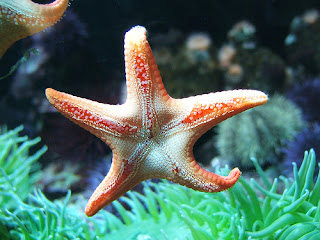 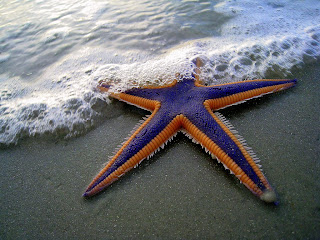 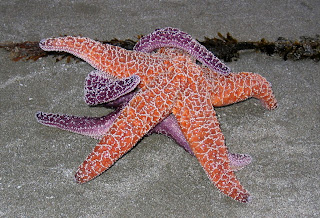